What Is a Novelty Toy?

By definition, a novelty item is designed and sold for its uniqueness. Oftentimes, it provides humor, but it could also just be something new and never-before seen. A novelty toy does not have a practical purpose although it can look like something that would be used every day. Novelty items are usually small and sold for promotional purposes, as a souvenir, or just for fun.

The great about novelty toys is that they’re usually not super expensive. Giving someone a novelty toy is a great way of showing that you care without risking a large amount of money. Parents can buy their children a present more often without having to spend a lot.

Most Popular Novelty Toys of All Times

If you had to think of one of the most popular novelty toys of all times, it would probably be the pet rock. In 1975, advertising executive Gary Dahl thought it would be funny to sell a rock with googly eyes, marketing it as a pet rock. Ironically, the idea took off.

He thought about it after he heard his friends complain about their pets. He thought a rock would make an excellent pet, because it was naturally obedient and easy to care for. The rocks came with a cardboard box with breathing holes (the rocks clearly didn’t need). They also included a 32-page official training manual. During the six months the craze lasted, Dahl sold 1.5 million pet rocks and became a millionaire. Pet Rocks were sold again in 2012, but they couldn’t recreate the same success as in the 1970s.

Novelty toys aren’t always silly things like pet rocks. Novelty toys are also the toys that are the newest thing on the market. Believe it or not, a teddy bear was a novelty toy at some point. In fact, Morris and Rose Michtom created the first prototype and asked Teddy Roosevelt for permission to use his name for it. He authorized it in 1902, and now you probably can’t even imagine of anyone not knowing what a teddy bear is.

Our product page are updating…

we have select 500+ new toys and make catalog.

if you want to get the catalog, please contact info@TonySourcing.com 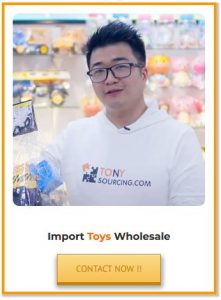